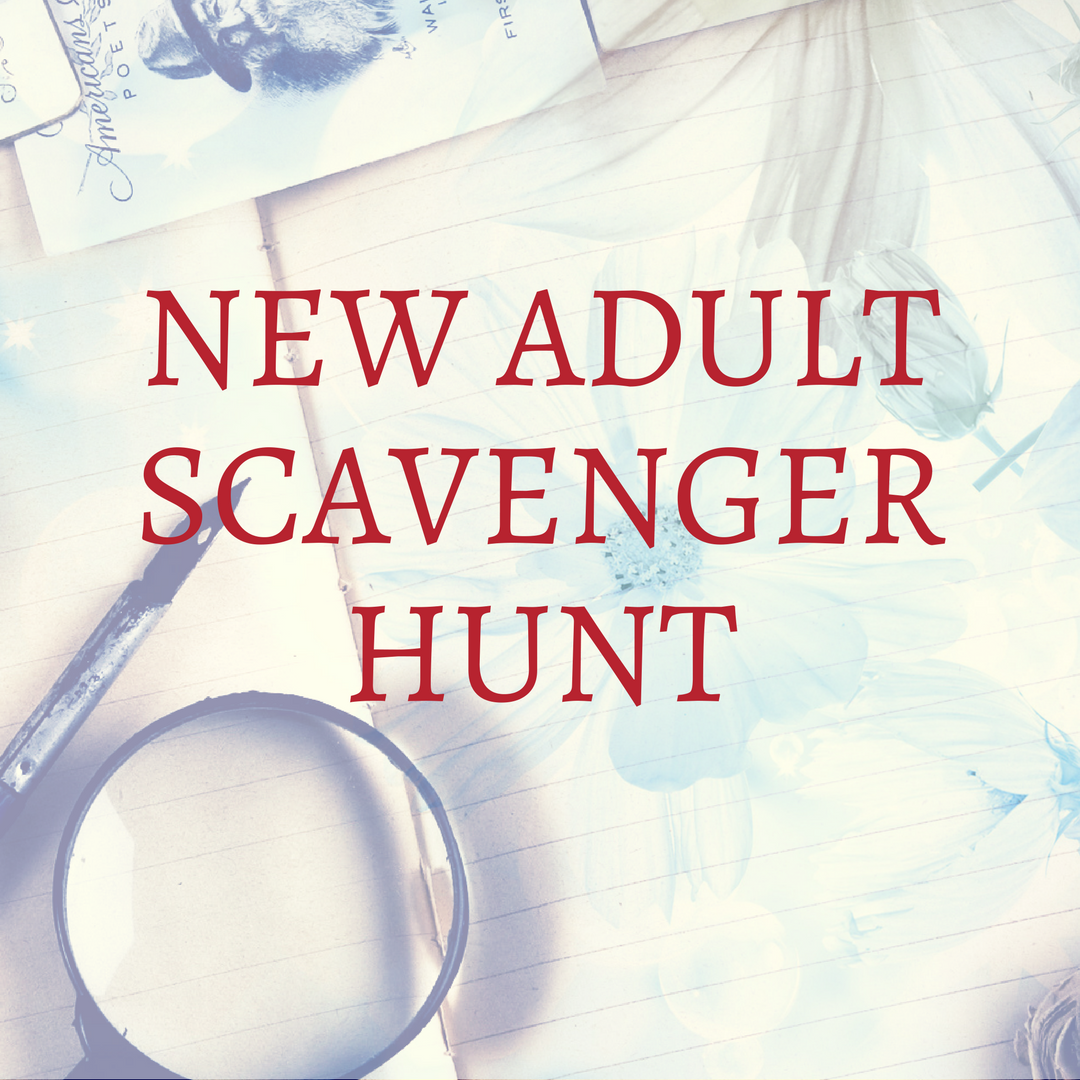 Welcome to New Adult Scavenger Hunt! This bi-annual event was inspired as a way to give readers a chance to gain access to exclusive bonus material from their favorite authors…and a chance to win some awesome prizes! At this hunt, you not only get access to exclusive content from each author, you also get a clue for the hunt. Add up the clues, and you can enter for our prize–one lucky winner will receive one book from each author on the hunt in my team! But play fast: this contest (and all the exclusive bonus material) will only be online for 96 hours!Go to the New Adult Scavenger Hunt page to find out all about the hunt. There are TWO contests going on simultaneously, and you can enter one or all! I am a part of the TEAM RED –but there is also a Team Purple for a chance to win a whole different set of books! If you’d like to find out more about the hunt, see links to all the authors participating, and see the full list of prizes up for grabs, go to the New Adult Scavenger Hunt page.

***THE SCAVENGER HUNT***
Directions: Below, you’ll notice that I’ve listed my lucky book number. Collect the lucky book numbers of all the authors on Team Red, and then add them up (don’t worry, you can use a calculator!).
Entry Form: Once you’ve added up all the numbers, make sure you fill out the form here to officially qualify for the grand prize. Only entries that have the correct number will qualify.
Rules: Open internationally, anyone below the age of 18 should have a parent or guardian’s permission to enter. To be eligible for the grand prize, you must submit the completed entry form by July 1st, at noon Eastern Time. Entries sent without the correct number or without contact information will not be considered.

Ceci Wolfe writes whatever her characters tell her to write, including YA, NA, contemporary family drama and romance, and Christian historical romance.  She was born and raised in Akron, Ohio. She graduated from Kent State University with degrees in English and library science, and enjoys her career as a librarian in Cleveland. She is the author of That Night, (longlisted for the 2018In the Marginsnational book award), Reckless Treasure, A Harvest of Stars, and the Cliff Walk Courtships series.
For more information visit her in one of the following place:
My website:  https://www.cecilywolfe.com
Amazon: https://www.amazon.com/Cecily-Wolfe/e/B01G2A0L1EFacebook: https://www.facebook.com/ceciwolfe/Instagram: https://www.instagram.com/cecilywolfe/Pinterest: https://www.pinterest.com/alyswolfe/Twitter: https://twitter.com/ceciwolfetumblr (That Night): https://www.tumblr.com/blog/ceciwolfeLibraryThing: http://www.librarything.com/author/wolfececilyBookBub: https://www.bookbub.com/authors/cecily-wolfe About Reckless Treasure:
When her mother is sleeping with the man she loves, what’s a girl to do?Francesca is weeks away from high school graduation and the hope of escaping her self-centered, grasping family – her trashy mother and hustling twin brother. While her crush on their older neighbor holds her attention, she is blind to what everyone else can clearly see, the love her best friend Mitch carries in his heart for her. When her dead grandmother’s high school boyfriend returns to town for his class reunion, his immediate attraction to Francesca is a game changer. Can Mr. Long – and his wealth – open up undreamed of opportunities for Francesca’s future, and at what price?
Buy links:
Amazon (Kindle Unlimited): https://amzn.to/2JTrS8M
Barnes & Noble (paperback): https://bit.ly/2ljnPny
Book Depository (paperback, free delivery worldwide!): https://bit.ly/2MH6a5V

To enter, you need to know that my lucky book number is 8.

Add up all the favorite numbers of the authors on TEAM RED and you’ll have the secret code to enter for the grand prize!
***CONTINUE THE HUNT***

To keep going on your quest for the hunt, you need to check out the next author, LYNN STEVENS.GOOD LUCK!! Enter below for a chance to win one of three eARCs of my upcoming novel, the 4th book in the Taking Chances Series, Remember That Night.